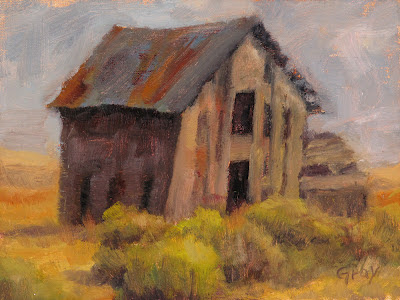 Today, my artist friend and I went painting at a tiny ghost town called Blue Stem, which is several miles south of Davenport, WA, on Highway 2. There are a bunch of abandoned wood homesteads by   a few grain towers by the railroad. Many of the wood buildings are already collapsed, but there are still a handful of them standing. There was one building taller than the others which I was drawn to. I saw a Great Horned Owl, peeking out from the opening of wall just under the roof. She flew away withoutflapping sound after staring at me for a while. It was such a cool experience. So I named this building, "Owl's House."

Email ThisBlogThis!Share to TwitterShare to FacebookShare to Pinterest
Labels: 6x8 in, landscape, oil on linen on panel