Painting in the Palouse

Since my husband Peter started studying at WSU this Fall semester, I've been utilizing my oppourtunities to come over to Pullman from time to time and paint out in the Palouse area in eastern Washington.

The weather has been unpredictable, especially the cloud coverage at a particular spot. Even if it is partially cloudy, I may be out of luck just when I want to paint because of the temprary overcast just before sunset. So this was my second attempt to paint the bird's-eye view of rolling hills at sunset from Steptoe Butte. 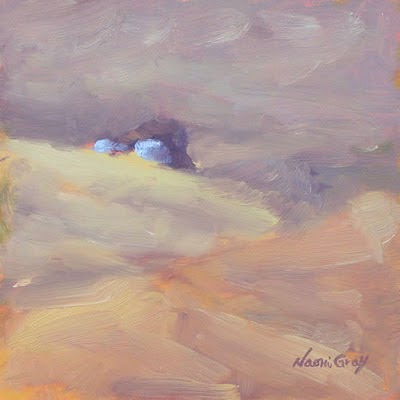 Sunset over Rolling Hills no.1, 6"x6", oil on hardboard Sold


Two days later, I went back to Steptoe. It was very windy in the field just below Steptoe Butte. But I really wanted to paint these grain towers. It was so gusty that it blew over my pochade box even though I had some weight on the tripod. So I tied down my full dayback to the tripod for extra security. 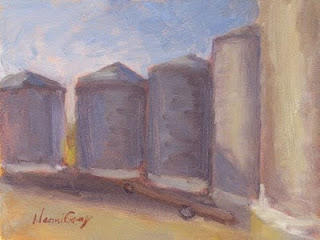 It was much more windy at the top of Steptoe Butte in the late afternoon. After taking a bunch of reference photos at the top, I patiently waited in the car for the sunset while eating late lunch. I finally decided to set up my pochade box in the back seat after reposioning the car for the better view, and away from the sun and wind. Then, a little bit before the sunset, I saw this painting opportunity that I dreamt of for the past several days. The sun was perfectly shining the rolling hills from the West side and illuminting the ground in various shade of pink. I was ready to paint that moment. It probably didn't take me more than 30 minutes. The sun quickly obscured behind the cloud line in the distance just before touching the horizen. Here it is. The mission accomplished. 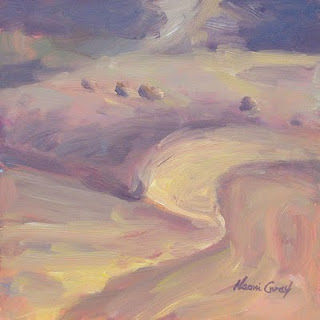 Sunset on Rolling Hills no.2, 6"x6", oil on hardboard Sold